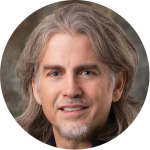 One of the central tenets of biology is that our genetics—our genotype—influences the physical characteristics we manifest—our phenotype. But with more than 25,000 human genes and more than 6,000,000 common genetic variants mapped in our genome, finding associations between our genotype and phenotype is an ongoing challenge. Indeed, genome-wide association studies have found thousands of small effect size genetic variants that are associated with phenotypic traits and disease. The simplest explanation is that these genetic variants work synergistically to help define phenotype and to regulate processes that are responsible for phenotypic state transitions.

Dr. Quackenbush’s work has found that gene regulatory networks, and their structure, provide unique insight into how genetic elements interact with each other. He has also found that the structure of the network has predictive power for identifying single nucleotide polymorphisms (SNPs) likely to be associated with phenotype through genome-wide association studies.

In his presentation, Dr. Quackenbush shows multiple examples, drawing on his work in cancer, chronic obstructive pulmonary disease, and the analysis of data from 38 tissues provided by the Genotype-Tissue Expression (GTEx) project.

In 1992 he received a fellowship from the National Institutes of Health to work on the Human Genome Project, which led him from the Salk Institute for Biological Studies to Stanford University and then to the Institute for Genomic Research (TIGR) before moving to Harvard in 2005.

Dr. Quackenbush’s research uses massive data from DNA sequencing and other assays to model functional networks in human cells. By comparing networks between groups of individuals, he has found new drug targets, explored chemotherapy resistance, and investigated differences between the sexes. He has made pioneering discoveries about how the genetic variants work together to determine our traits.

Dr. Quackenbush has published more than 250 papers, and his work has been cited more than 63,000 times. He has received numerous awards for his work, including recognition in 2013 as a White House Open Science Champion of Change.