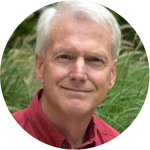 The analysis of stepped wedge trials typically focuses on estimating the intervention effect (assumed to be instantaneous and constant following implementation of the intervention) and relies on strong parametric modelling assumptions such as generalized linear mixed models. Violation of these assumptions can lead to bias and/or incorrect inference. In this presentation, Dr. Jim Hughes focuses on carefully defining the estimand of interest and shows how the theory behind semiparametric regression and structural nested mean models can be used to develop an appropriate doubly robust estimate with minimal assumptions. He derives the asymptotic variance of the estimate as well as the variance under the permutation distribution to provide better finite sample behavior. Finally, he uses simulations to compare efficiency between the various approaches.

Dr. Jim Hughes received an M.S. in biomathematics in 1980 and a Ph.D. in statistics in 1993, both from the University of Washington (UW). He joined the UW Biostatistics department in 1993 and is currently a Professor of Biostatistics at the UW and Affiliate Professor at the Fred Hutchinson Cancer Research Center Vaccine and Infectious Diseases Division. Dr. Hughes works primarily in the area of HIV/AIDS and sexually transmitted infections (STIs) and has been the lead statistician on a number of clinical trials in the HIV Prevention Trials Network as well as other individually and cluster randomized trials in HIV/STI prevention. In 2007, along with Mike Hussey, he published a key paper outlining statistical approaches to the design and analysis of stepped wedge trials and he continues to work on methods for stepped wedge trials.