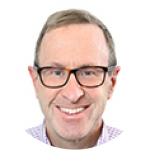 In this webinar, Dr. Stuart G. Baker focuses on the method of latent class instrumental variables (often called the LATE or CACE approach), which was developed independently by Imbens and Angrist (1994) and Baker and Lindeman (1994).

Dr. Baker discusses how to estimate the effect of treatment received (in the complier latent class) in a randomized trial with all-or-none compliance. One example involves estimating the effect of breast cancer screening on breast cancer mortality in a randomized trial in which some participants refuse screening. He also discusses the paired availability design that he (along with K. S. Lindeman) developed in 1994, which estimates the effect of treatment received (among the consistent-receiver latent class) in a set of before-and-after studies with changes in availability of treatment over time.

Dr. Baker’s main application of the paired availability design is a health promotion study involving the effect of epidural analgesia on the probability of Cesarean section. He contrasts the results from the paired availability design with those from a multivariate analysis that likely omitted an important confounder. The emphasis of the presentation is on assumptions and concepts, combined with some simple formulas.

Dr. Baker was the first recipient of the distinguished alumni award from the Department of Biostatistics at the Harvard School of Public Health. He is also a fellow of the American Statistical Association.